As you can imagine by my written work so far… I love elves. They’re are some of my favorite mythological characters… but over the years, there have been different incarnations of them. So which one is the right one? Well technically speaking, there is no right or wrong in Fantasy… and I can say that with a straight face after watching Jeremy Irons in Dungeons and Dragons!

In all seriousness though, everyone has their own interpretation and any one of them can be labelled as ‘correct.’ So where did all of these different variations come from?

In early works, specifically the old norse legends, elves (or ælf, ylf, alp, alpi, elpi, alfr  depending on time period and region) are known for having dark skin in many cases, piercing eyes, and are almost flawlessly elegant. They are known for being evasive and deceptive in these stories. There is no reference to whether or not they have pointed ears and given that the characters have a hard time identifying them, it seems likely their their ears are either concealed or similar to humans. They do share many traits with faeries, brownies and pixies, which would lead one to believe that they were all one mythical form at one point.

Hrolf Kraki’s Saga description of elves:
“He sat up and hauled back the fell. There lay a woman in a sheening sark. Never had he seen any this beautiful. The straw hardly cracked as she rose to her knees and smiled at him. Full breasts and hips thrust against her garment, shone through it; their sweetness overwhelmed all winter chill and stench, he was suddenly drown in summer. Raven’s-wing locks flowed past a face pale and strange, too cleanly carven to be wholly human. Her eyes were the unblinking gold of a hawk’s.”

Despite no reference to pointed ears, Skyrim’s version of the elf seems to fit the description:

Now I’ll admit that this is not how I see elves, and there are other perfectly good examples. Take a Mid Summer Night’s Dream…

From Shakespearean times, the word elf saw use in English as a term loosely brelated to the French fairy. It also became associated with diminutive supernatural beings like Puck, Robin Goodfellow, brownes, and even pixies were associated with them. Which may have given author J.K. Rowling the inspiration for her version of elves: 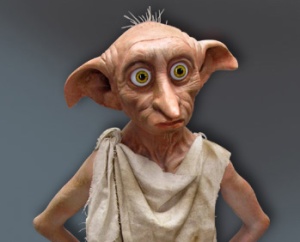 It logically makes sense… but this came from Shakespearean times and, like the Roman’s borrowing from the Greeks, things get distorted. So since I don’t subscribe to the more intelligent and useful version of Jar Jar Binks idea… let’s move on.

Moving forward into modern times, dealing with Tolkien and his Middle Earth. Here we have several incarnations of elves… including, oddly enough, at least one without pointed ears. In his stories, the elves are created as a separate race by the Gods. Near as I can tell, they were meant to be a sort of angel that was not meant to remain forever.

Tolkien, thankfully, tried to go back in some ways to the original designs… though I think he may have pushed the feminine button a little too hard… and apparently I’m not the only one who thinks so.

Following Tolkien’s popular depiction of elves… we now have a plethora of different renditions to choose from, some of them good… others are just downright cartoony! Everything from the early incarnations in Dungeons and Dragons, to later appearances in Warcraft, Dragon Age, etc.

So I realize that I still haven’t answered my own question; which version do I believe is accurate. Well, in my book, Magnifica, elves are much like humans. They are warm blooded creatures that share many of the same traits with our species. They are capable of producing offspring with human partners, so their internal biology isn’t too much different. However, the few elves that are not infected with the Ulium disease, outlive humans by almost 80 years. They are light eaters and have a sixth sense that allows them to detect magic and communicate with nature on a much more personal level than humans. They are about the same height as humans and slightly stronger on average.

So what do they look like? Well if you read my post on creating rules for your story? One of my rules was that everything had to be as realistic as possible. In other words, it wouldn’t be too much of a stretch to buy that some of these creatures could exist. I’m personally not at all fond of the anime style, while at the same time, the Lord of the Rings version has ears so small that a strategically placed hairdo can cover them… which I suppose you could argue is why early versions don’t mention there ears.

That said, in my personal opinion, the best version comes from a Skyrim mod I often use in my games. This is what I picture when someone mentions an elf:

The ears aren’t too long but stick out just enough to be pronounced, they’re as tall as any human, their skin is slightly tanned while at the same time nearly flawless, so it covers all the bases mentioned above. Again, this is all opinion-based so feel free to disagree with me. I won’t take offense!

You may notice that I didn’t mention Christmas elves… honestly, I just don’t think they fit in here. Given that St. Nicolas’ legend stems from Asia minor, which is a good distance away from the Nordic areas, I’d be more apt to believe that Christmas elves are more closely related to a version of dwarves given that they’re portrayed as being very short, and manual laborers. Maybe I’m thinking too much into this? Well either way, that’s my two cents.

See you on the flip side!
-Jim

← From My Writing Playlist #Writing #Author #Advice
Can fictional stories be harmful? →